Following the route down of Greenway, after the start in Horta de Sant Joan with spectacular views of the Ports Natural Park, we arrive at the old Station of Bot. Recently, a restored wagon has been placed at this point and transformed into a kind of train-cafeteria in Bot, where in addition to being a curious stop for cyclists in the Greenway, local people also approach it. .

In fact, Bot is the only municipality in Terra Alta where the Via Verda route passes near the town center.

Therefore, you can stop to see first hand its renowned wineries, of which Sant Josep Vins and Cal Menescal stand out.

From this point, you can start different excursions either on foot or by bike. We recommend you visit the Olles de Baubo, to take a typical bath when the heat is tight, a real paradise where the course of the Canaletes river has traced a spectacular path. Along the way you will find fields of vineyards and almond trees, which depending on the time of year will change the landscape with different shades of color.

If you are one of those who like to see hermitages, you can make a short getaway to the picturesque Hermitage of Sant Josep, located at the top of a small hill with good views to contemplate the village of Bot and the mountains known as “Agulles de Bot“. In addition, from here you can take a getaway to the place known as Forat de la Donzella, from where natural water gushes.

Greenway and train-cafeteria of Bot curiosities

Did you know that the train that traveled these landscapes was known by the nickname “lo Sarmentero“? It is said that it crossed many vineyards, and that is why they gave it this name, since the branches of the vines are called vine shoots. So, precisely the train-cafeteria of Bot is called like this:”Lo Sarmentero“.

And you, will you stop at the train-cafeteria in Bot? It’s the typical instagramer photo that can’t be missed on this tour. Make your reservation for one of our packs. We will tell you in detail what you can do in our territory and all the stories hidden behind the Greenway. 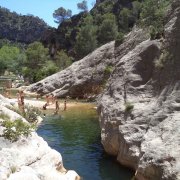 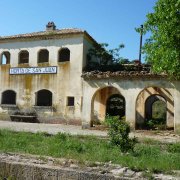 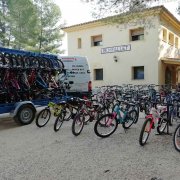 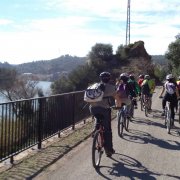